We take in this publication the article “Confronting Ethiopia’s Abusive Siege” by Kenneth Roth. Is the point of view of expert Kenneth Roth, executive director of Human Rights Watch, published on its last day in HRW an article spotlighting the Ethiopian government’s ongoing blockage of desperately needed humanitarian aid for Tigray and other African government’s weak public response.

According to Roth, Africa must do its part to break Ethiopia’s abusive Tigray Siege. The Ethiopian government’s chokehold on humanitarian aid needs to end.

In this article, we also include links to our blog posts with writings by Angel Olaran (Abba Melaku) so we can have more reference information. 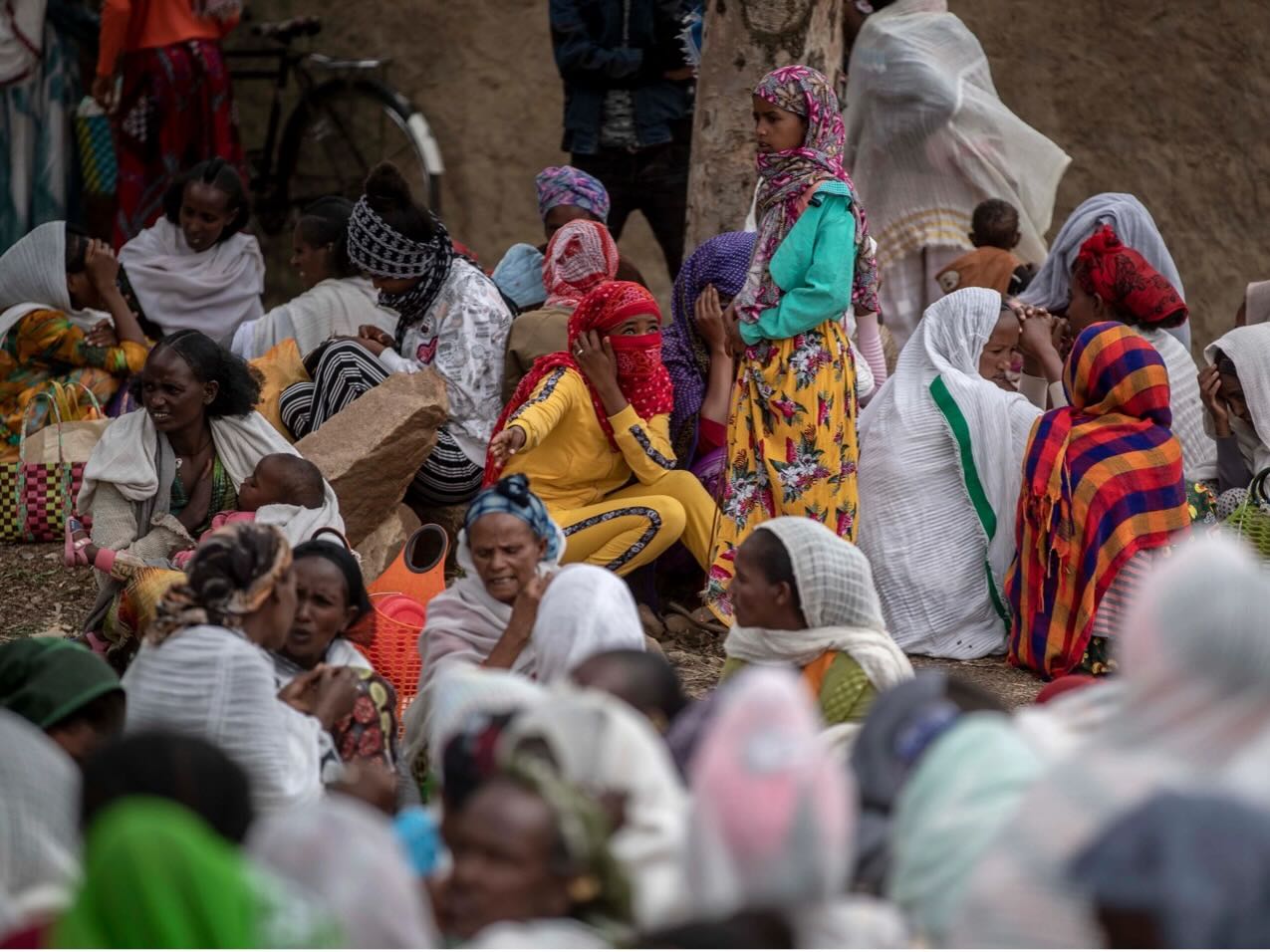 Ethiopians wait for food distribution in a small town north of Mekele, in the Tigray region of northern Ethiopia, May 7, 2021. © 2021 AP Photo/Ben Curti

The United Nations’ first chartered ship carrying Ukrainian grain, which had been sitting in blockaded silos as a result of Russia’s full-scale invasion, docked in Djibouti on August 30. Free passage of this shipment, destined for Ethiopia, followed concerted pressure by African governments on Russia as well as U.N.-led negotiations. But more diplomatic muscle, including by African countries, is needed to end the Ethiopian government’s almost two-year-long chokehold on humanitarian assistance to the beleaguered Tigray region. Otherwise, many of the Ethiopians most at risk of hunger are unlikely to benefit.

Ethiopia is one of six countries the U.N. has singled out for having people at risk of starvation. Millions in the country’s south and east are grappling with alarming levels of hunger and malnutrition due to one of the worst droughts in decades. Communities in conflict-affected areas in the country’s north rely on humanitarian assistance. But it is in the Tigray region, specifically, where a severe starvation crisis has persisted for over a year and could be reversed through government actions.

Since the outbreak of war in Tigray in November 2020, Ethiopian forces and their allies have frequently violated the laws of war. They pillaged and targeted homes and civilian infrastructure—crimes the Tigrayan forces would later replicate in other regions—while shutting off basic services and severely obstructing aid to civilians caught up in the fighting. Then the authorities imposed an effective siege on the entire region, keeping out virtually all humanitarian assistance for civilians in violation of Ethiopian domestic law, international human rights, and humanitarian law.

For the first eight months of the conflict, Ethiopian forces and their allies pillaged businesses, hospitals, banks, livestock, and harvests, leaving the region dependent on assistance. The impact of this destruction has been devastating. It has prevented people from getting healthcare, food, and other basic services, and stymied the recovery of a health system broken by the conflict. For months, federal and regional forces blocked off the roads, making it nearly impossible for private actors or humanitarian agencies to carry in medical supplies or food. Supplies decreased to alarming levels.

Human Rights Watch researchers spoke to doctors in February who had treated dozens of survivors of a deadly drone strike without access to intravenous fluids or protective gloves. A journalist who traveled to Tigray in late May and early June told us he saw “hunger everywhere.” In August, the U.N. warned that one out of three Tigrayan children under the age of 5 is acutely malnourished.

Since the Ethiopian government declared a humanitarian truce in late March, humanitarian convoys previously blocked from entering Tigray were finally making it into the region. But what was getting didn’t come close to matching the mounting needs of a vulnerable population. With fuel deliveries and cash flows stymied—and the government still keeping the banks closed and telecommunications shut off—aid organizations are struggling to save lives.

The resumption of fighting in northern Ethiopia on Aug. 24 puts aid agencies’ efforts at further risk. A U.N. spokesperson noted that Tigrayan fighters entered a U.N. warehouse in Tigray’s capital, Mekelle, and seized 12 fuel tankers intended for humanitarian use. Tigrayan forces have also pushed into the neighboring Amhara region. A probably Ethiopian government airstrike in Mekelle on Aug. 26 reportedly struck a kindergarten and killed at least seven people, including children. Delivery of humanitarian supplies by road remains suspended since then, as are humanitarian flights. The siege in Tigray remains very much in effect.

Airstrikes, and the pillage of limited fuel supplies, will only harm Tigrayans who are already suffering the effects of the conflict and the siege. Most people in Tigray can’t buy the food that is available because the cost of staples continues to soar. A resident of the town of Shire said that the cost of teff, a grain that is one of the country’s main staple foods, had tripled over the last five months.

The U.N. Security Council sought to tackle broad restrictions on aid and essential goods in the conflicts in Yemen and South Sudan by passing a resolution in 2018 condemning the unlawful denial of lifesaving humanitarian aid and essential services as a strategy of warfare. In the hope of preventing this elsewhere, the Security Council resolution pointedly calls on the U.N. secretary-general to swiftly inform the council when the risk of conflict-induced famine arises.

And yet, faced with flagrant violations of its own resolution in Ethiopia, the Security Council never sanctioned those most responsible for unlawful actions during the conflict. What’s more, the council hasn’t even placed the ongoing siege in Tigray on its formal agenda.

Concerted African diplomacy around the Ukraine grain crisis and Russian blockade stands in stark contrast with Africa’s inaction on Ethiopia on the Security Council. The three elected members representing the African Union on the Security Council—Gabon, Ghana, and Kenya, known as the A3—have repeatedly stalled any public discussion on Ethiopia, allowing this blatant disregard for international norms to persist.

In the meantime, Ethiopia and its partners in the region and beyond have allowed access to life’s necessities to become a political bargaining chip. Ethiopia’s state minister for foreign affairs recently said that basic services won’t be restored until the two parties begin peace talks, whereas Tigrayan authorities want services restored before talks can begin. With the resumption of fighting, it’s even more essential for the world to make clear that negotiations and access to aid must be decoupled.

The U.N. Security Council, starting with the A3, and the African Union need to act now. They should publicly call on Ethiopia to completely lift its chokehold on desperately needed humanitarian aid and its shutdown of basic services. They should insist that the warring parties, including Tigray’s forces, abide by international law and facilitate assistance to those in need without any preconditions or delay. The Security Council should hold a public debate to address conflict-induced hunger and place Ethiopia on the council’s regular agenda.

It is crucial that such governmental practices are not normalized. Those responsible for blocking food, fuel, and medicine, as well as using basic services as a bargaining chip, should be held accountable. Those using starvation of civilians as a method of warfare by impeding relief supplies or depriving civilians of what they need for their survival can be prosecuted for war crimes. For this to happen, continuing the work of the United Nations International Commission on Human Rights in Ethiopia, which is up for renewal by the U.N. Human Rights Council in Geneva in September, will also be critical.

African and U.N. engagement over Russia’s Black Sea blockade has demonstrated what public pressure combined with diplomacy can deliver on humanitarian aid. Ships departing from Ukraine’s ports laden with grain is the best kind of dividend of that approach. But we’ve also seen the opposite: a largely forgotten crisis in Ethiopia where the weaponized starvation of an entire region hasn’t generated anywhere near the same attention. Unless the international community rallies to ensure everyone in Tigray has full access to humanitarian assistance, grain shipments finally arriving in Ethiopia may not get to one of the populations in greatest need. If that’s the ultimate result, the grain deal will be a hollow victory.