From Wukro, and after several days without electricity, the missionary Angel Olaran writes about the beginning of what could be the ultimate military confrontation. In the letter, which we received on Friday September 2, he tells us about the difficulties they are having to survive in Tigray due to the lack of basic necessities. Moreover, with the addition of the renewed fighting on the borders and the bombing of a kindergarten area in Mekelle, which caused the death of several people and children.

We were able to speak to Father Olaran on 22 August and he told us that there were “rumors of a possible start of fighting on the fronts”. Unfortunately, a few days later they became a reality. On that day, he also asked us if we could transfer funds for them to buy food. Four days later, we received his confirmation of receipt of the money. Now, they are taking the necessary steps to ensure that the Tigray people receive the food aid, apart from the little that is reaching them, which he comments on in the following article that we publish.

As we expected, the negotiations between the federal and Tigray government have not avoided the military confrontation – for 4 days now – in some of the border areas, and according to the news we are receiving, the winds are in our favor. (You can read the news published by El Periódico -in spanish-)

It is shameful, to put it politely, that the organizers of peace in the world have been caught in their nappies by something that those of us on the ground foresaw months ago. And the worst thing is that they won’t even begin to wonder what their incompetence is turning out to be. (For Angel, Tigray is a dark side of the UN).

About two weeks ago, with the permission of the federal government, an official EU mediation commission arrived in Tigray – and, as sadly expected, without much significance – although, once again, the commission was not without the best of intentions. To return to African wisdom: “maneno hayavunji mifupa” – words do not break bones.

Tigray TV footage of the airstrike on a Mekelle playground 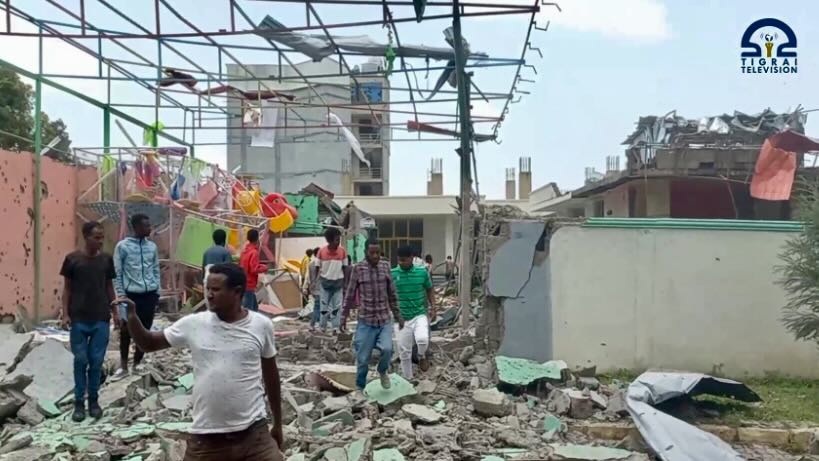 Due to restoration work on the Tekese river dam, we have been without electricity for 9 days – today, the 29th, we are now receiving this service -.

These days, some humanitarian aid is being distributed to some families: about 12 kg of wheat, a bottle (that of the fanta) of oil per person, including children, and, when it arrives, a grain used to make shiro. It is worth seeing the happy faces of the people who go home with such a precious supply. For most of them it was the first time they received it, when it should have been monthly for at least the last 15 months.

The problem we have now is that the wheat is received in grain that has to be taken to the mill, with the added problem of the lack of electricity for about 12 days, until a few hours ago, so the lines can be scary.

We hope that, despite the air raid on Makelle, the UN planes will continue to arrive.- our only lifeline.

And once again, we’ll have to wait and see. By all indications, this is going to be the ultimate battle – as in heads or tails.