Angel Olaran writes after a peace agreement in the Ethiopian conflict

Angel Olaran writes after a peace agreement in the Ethiopian conflict

The Ethiopian Government and the Tigray People’s Liberation Front (TPLF) agree “formally to a cessation of hostilities” and Angel Olaran writes after a peace agreement in the Ethiopian conflict. It also implies a “systematic, orderly, smooth and coordinated disarmament”, as reported on November 2 by the high representative of the African Union (AU) for the Horn of Africa, Olusegun Obansanjo. He announced it at a hearing in Pretoria, where he began the peace dialogue between the two sides, under the auspices of the AU, on October 25.

Both sides also pledged to “restore services, unhindered access to humanitarian supplies” and “protect civilians, especially women and children” in Tigray. In addition, Obasanjo indicated that the AU would assume “the monitoring, supervision and verification of the implementation” of the agreement.

Two days later, on Friday, November 4, Angel Olaran sent us the brief that we publish below and that titled “Against all odds”. 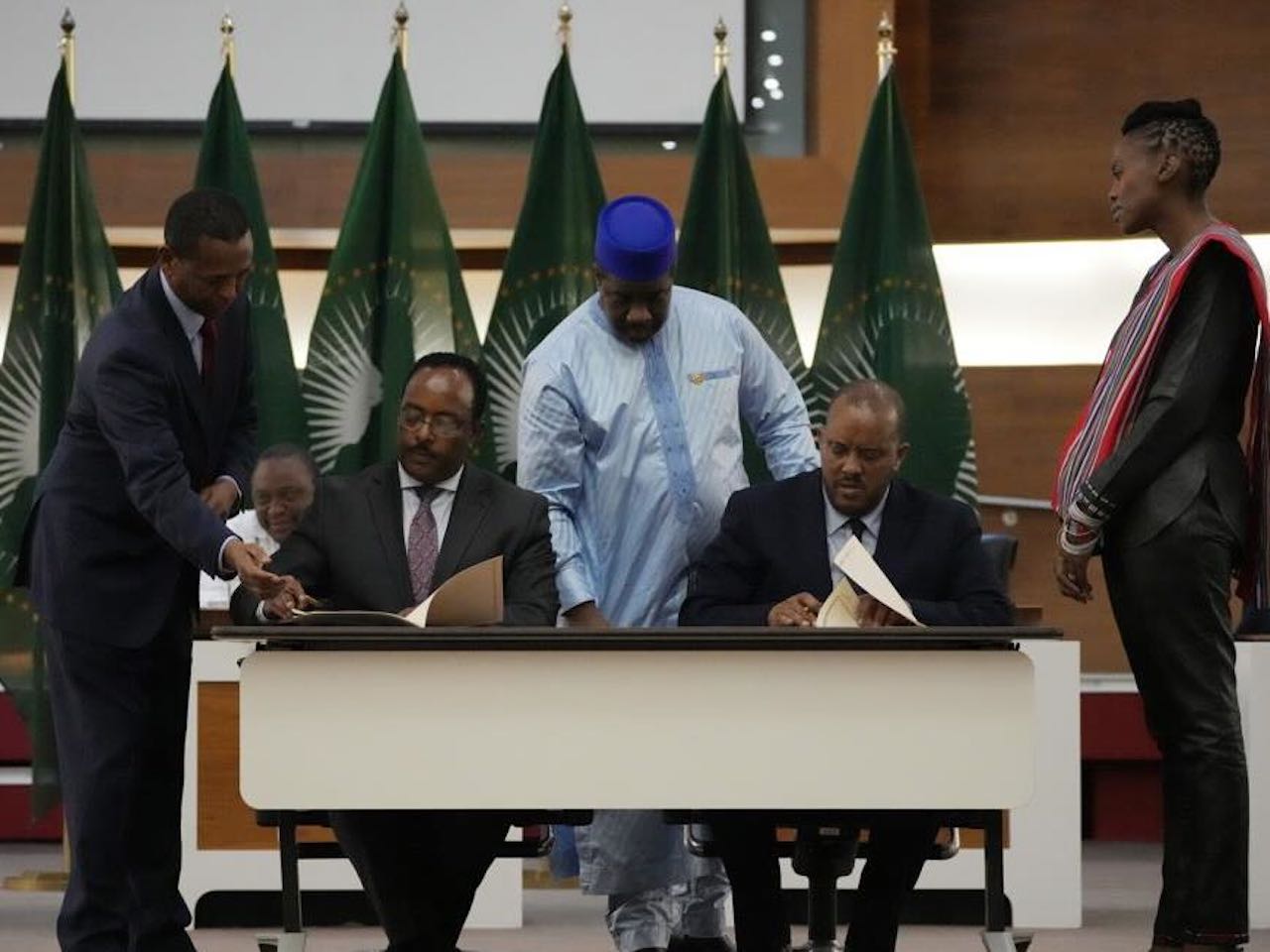 . . . and with some serious reservations, the negotiation in South Africa has been concluded. There is access to the 15-article document signed by both parties. No comment has been heard from the Tigrayan government. Meanwhile, the Ethiopian PM has congratulated the nation on the success of his government, stating that all his demands for the negotiation have been granted. An excellent occasion to wear a badge of honor.

Mr. Obansanjo, former president of Nigeria, and at the same time chairman of the negotiating commission, expressed his satisfaction with the agreement reached and approved by both parties. He went on to say that he hoped that its implementation would not fail.

It seems that the maximum expected has been achieved: national unity, i.e. Tigray will not be independent. I believe that on more than one occasion I have expressed my feeling, following the sentiment of the Tigrians, that they never fought for their independence: they were attacked by 5 armies at the same time on as many fronts. It is absurd to have sustained such a bloody war with so many crimes against humanity and war crimes, including genocide: there is talk of more than 600,000 civilian deaths, thousands of women raped, hospitals destroyed, an increase of 1,600% of child deaths, with a long et cetera, including the death of another half million young people, who with little more than a rifle in their hands have been thrown to the fronts. And all this, to reach this erroneous conclusion of national unity. It is only in the last few months, perhaps 5 months, that people have begun to talk about the Tigrayan nationality. At least, this recognition makes us think that the Tigrayan government is legitimate and not a junta of criminals and terrorists as the Ethiopian Parliament describes them.

Another achievement is the ceasefire, since the signing of the document – yesterday November 2nd. I just returned to my room (10 pm) after following some TV programs; one of them commented that, today, November 3, the war continues on some fronts and a couple of drones have been launched.

This is happening in: Adigrat, Zalambessa, Machew, Adwa.   And as always also in this case it will be: it is the other who has attacked first. No official body from the UN or others is expected to be present to guarantee this cease-fire.

To this comment can be added how fragile the unilaterally offered ceasefire by the Ethiopian Prime Minister was in June last year, when the Tigrayan troops entered Makelle. His troops, according to him, left Makelle following a strategic plan, since Makelle was of no military value, and according to others, they left as prisoners of war. Whether for one or the other, for a couple of weeks the fire ceased with the federal army, but not with the Amhara and Eritrean armies, over which the Ethiopian PM seems to have no authority whatsoever, even today. Hence the uncertainty as to whether these same armies still present in Tigray will accept this new cessation of hostilities, despite the fact that the negotiations have accepted the borders prior to the hostilities which, tomorrow the 4th, will be two years since their beginning. The Amharas claim part of the West of Tigray and the Eritreans part of the North. It is only from November 4, 2020, that these armies are present in Tigray.

A third achievement: humanitarian aid. More than a year ago, the Tigrayans were supposed to receive 100 trucks of humanitarian aid daily. That would have meant 36,500 trucks in one year alone. Not even 5,000 trucks came in, and part of the population of Wukro, including us, have not received any aid. On a couple of occasions I commented how happy mothers and fathers were to go home with 13 kg of flour per family, plus oil equivalent to a bottle of Fanta and 3 kg of something else, for one month – no family has received the equivalent for another month. It has been about two months since any truck with humanitarian aid has arrived.

Let us hope that, in this case, this humanitarian aid with the international weight of negotiation, followed by many official institutions, has more credibility than the one already mentioned.

And it is hoped that soon, in the next 30 days, in Tigray we will again have the possibility to enter and leave as before the hostilities began; to be able to receive services from banks, to have access to telephones and internet, as well as fuel and much more. (In the next publication, Angel Olaran claims that they are still waiting for the truck with humanitarian aid).

We recognize our little wasteland and it has never crossed our minds that, after a similar negotiation, humanely and conscientiously followed by our mother institutions, they would start shouting: support with so many thousands of euros, followed by others increasing the amount, reaching a telethon atmosphere. We would be satisfied, if in a simple, unpretentious way, we would be offered the crumbs that are of no use in other places where many billions are offered. Here too, we are suffering the incompetence of our “big brothers”. Do you know the reason for this war?

We trust that national principles are above possible threats of sanctions by the Western power, the UN, the African Union included. It would not be strange if the IMF has something to do with these threats if, for national security reasons, it fails to sell 40% of the value of the Commercial Bank of Ethiopia.

The limitation of the body does not prevent me from meeting you tonight in Mollerussa.

Once again, thank you very much for your love.

PS. Nov 4 noon: Since the Tigrayan representatives in the negotiations have not yet returned to Makelle, the local government has not offered any statement on the matter.