Father Olaran emphasizes that “there are many families in need of microcredit to rebuild their lives”. The missionary, in this publication, regrets that “many of the women who used to support their families with the help of microcredits, are back to zero in domestic economy, with the aggravating factor of the debts contracted, already mentioned, with the rent and food on credit during these 18 months”.

Angel Olaran shares images of the family of Tzahayé – in the photos with his wife and 3 daughters – in need of microcredits to rebuild their lives; and images of Welela with 8 children and the sick husband who prepares sandwiches that the children sell in the streets.

The Basque missionary also updates the information on communications and air services, assures that the young people do not have the right to leave Tigray, there is still no news about the opening of banks, nor of public transport by road – only trucks with humanitarian aid enter -, nor of the withdrawal of the Eritreans troops and the Amharas forces to the pre-conflict frontiers. It confirms that the work of repairing the damage of the war has not yet begun.

Situation in Tigray? Although few, telephone lines and the internet continue to improve.  Air services of Ethiopian lines have started, between Addis Ababa-Makelle, but the young people have no right to leave the region. Electricity service is good.

As of today, January 12, we have no news that the independent international organization is getting banks or public road transport open – only trucks with humanitarian aid are coming in.

On a BBC News program yesterday “Focus on Africa ”, they showed pictures of tanks and other heavy weaponry being handed over to the federal army by the Tigrians – it must have taken place in Agulae, the town before Wukro.

As of now there is no news that the Eritreans have returned to Eritrea, nor the Amharas to the borders prior to the start of the conflict on 11-2-20 – these operations are already under the command of the federal army. Little has been heard of the current state of political, military and other relations between Eritrea and Ethiopia before they began their joint hostilities against Tigray. Work has not begun on the repair of bomb-affected businesses, schools, hospitals, houses, etc.

Medicine continues to be in scarce supply and the little that is available is at abusive prices, coming from the black market. Not even with a doctor’s prescription can a person withdraw money from his bank account.

Something that begins to be worrying, at least, to make us wonder about the role of the independent international commission that, as presented on national and regional television, entered Makelle a few days ago, amidst kisses, hugs, speeches, congratulations. They are the ones who have to organize, monitor and evaluate everything related to the implementation of the principles agreed upon at the meeting held last November 2 in South Africa.

As I mentioned above, the Tigrayans continue with the disarmament.

We have news that young people from our environment continue to leave the different war fronts, returning to their homes, as well as the entry of others in camps, from where we have received requests for cultural music instruments and sports equipment.

The entry of humanitarian aid is still at a minimum. I recently commented that, in the last 18 months, few families have received it 3 times; most have received it 1-2 times. And some, including ours, not even once. Details of the level at which the much-vaunted humanitarian aid moves: amount offered to each member of the family from birth: 15 kg of wheat, the contents of a bottle of Fanta with oil and between 2 and 4 kg of cereal for the mashed cereal that accompanies the injera. Sometimes neither the oil nor the cereals were included. In spite of this, as I have mentioned before, the joy of the teachers, fathers and mothers of the polytechnic school, arriving home with the kilos of wheat, was thrilling. I am not aware that, at the South Africa meeting, it was detailed what the much-vaunted humanitarian aid was going to consist of. I wonder how the thousands of women, many of them mothers and grandmothers with organizational positions within the UN, the EU, the AU and other institutions that accept this type of regulations, will live this fact: not even a bar of soap! And with this aid, they have to cover all the other needs of the family: health, electricity, water, school notebooks, clothing, house rent… Don’t these women realize that between the concept of ‘humanitarian aid’ and the aid that reaches the families there is a contradiction in terms?

This type of aid would be better described as ridiculous, inhumane, mock aid … . It gives the impression that reading ‘humanitarian’ reassures them, and makes them proud of the work done, since, according to them, this is what the World Health Organization requires: 15 kg of diet per person per month. In our case, with those 15 kg the person has to pay for all other daily expenses in addition to eating. And, as mentioned above, this help has reached about every 6 months and between 9 and 18 months to the majority of the population.

And questions are already arising that will turn out to be cruel realities: the costs of repairing the thousands of houses damaged by bombs; payment of food on credit; payment of rents for the last almost two years … . They estimate that the opening of the classrooms will take 5 more months, which will mean 4 years without classes for students from 7th grade onwards.

Many of the women who used to support their families with the help of microcredit are back to zero levels in the domestic economy, with the aggravating factor of the debts contracted, already mentioned, with the rent and food on credit during these 18 months.

There are many families, like that of Tzahayé – in the photos with his wife and 3 daughters -, in need of microcredits to rebuild their lives. 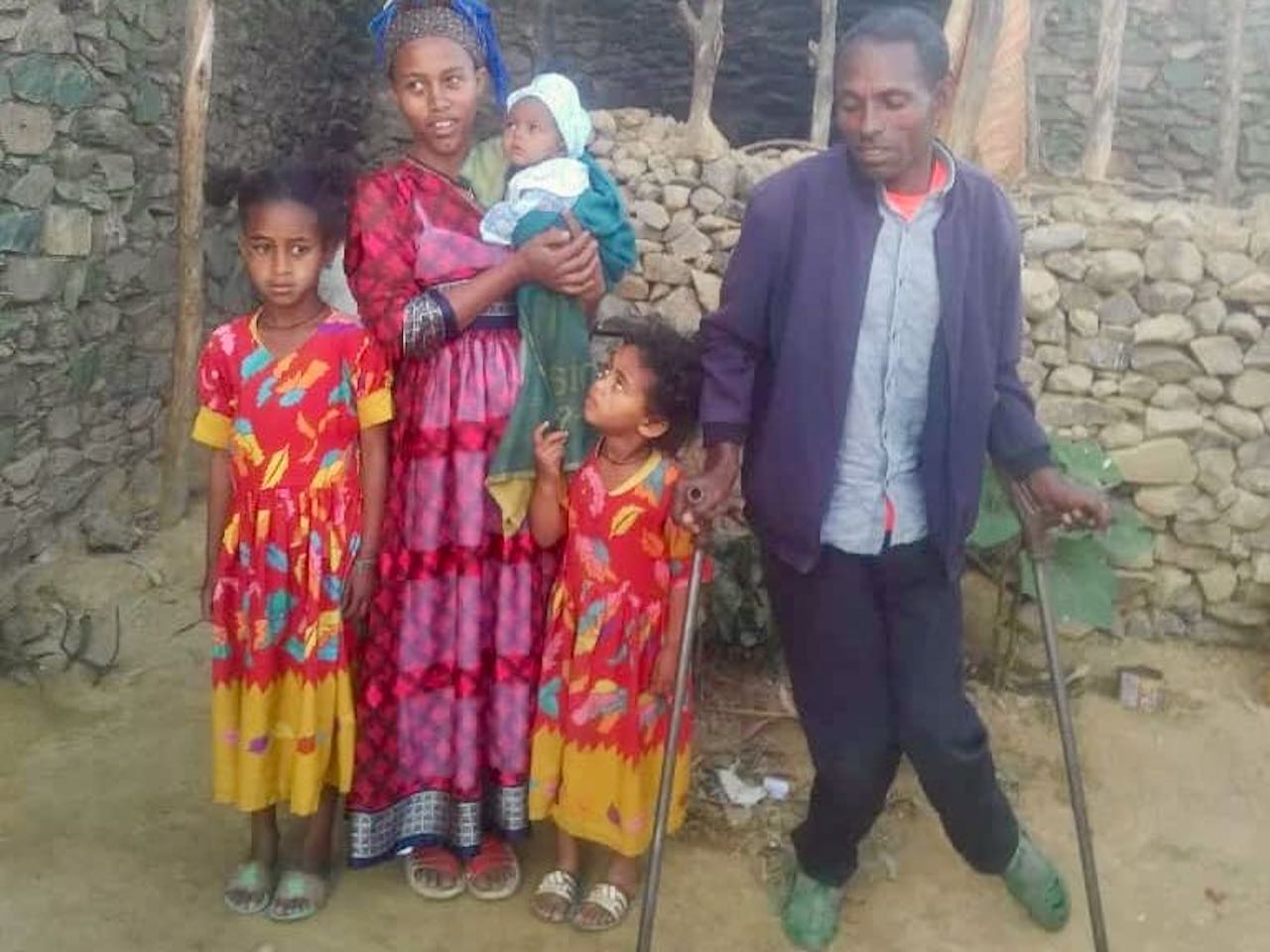 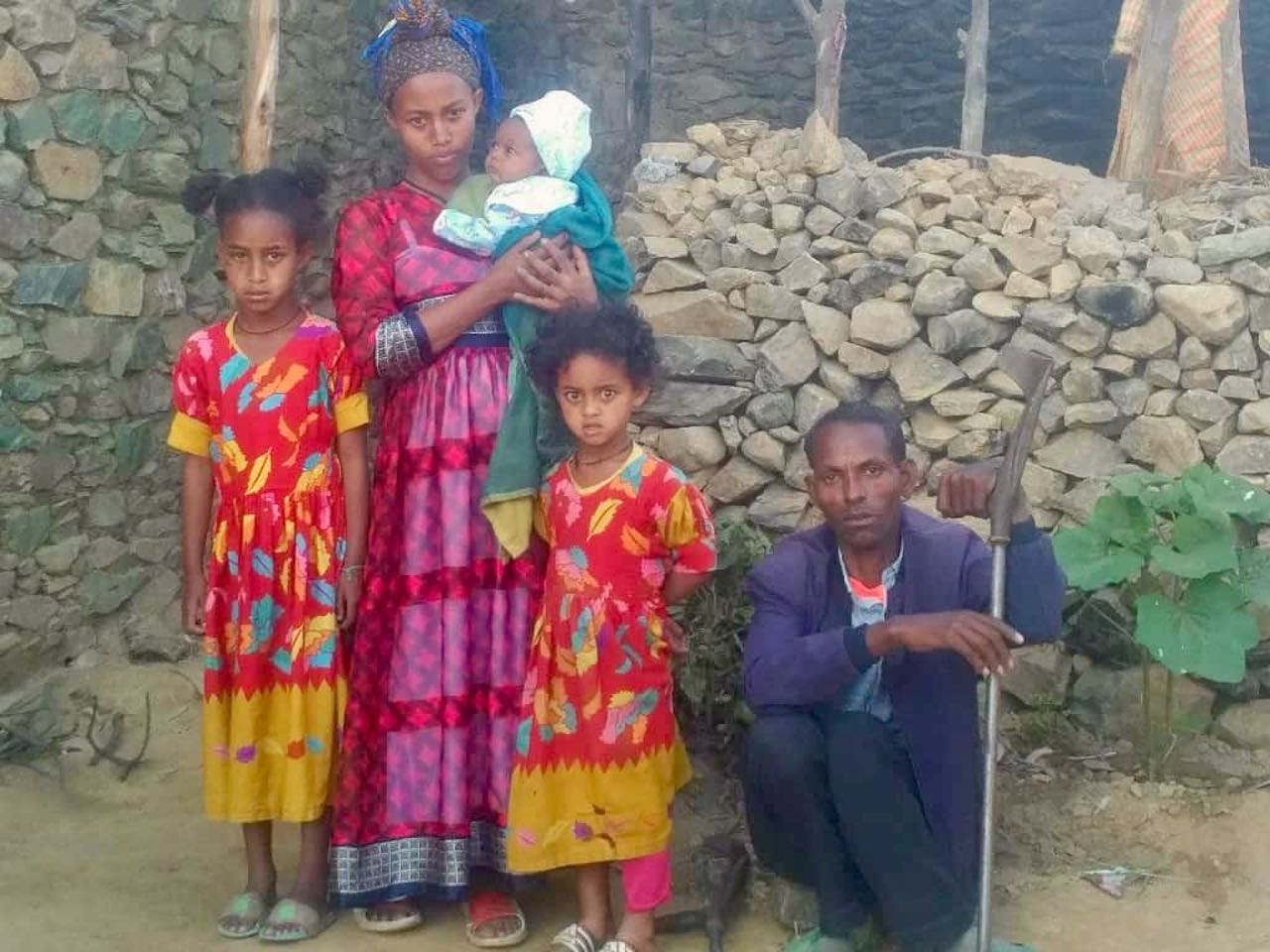 And that of Welela with 8 children and a sick husband; in the photos we can see her preparing sandwiches that her children sell in the streets. 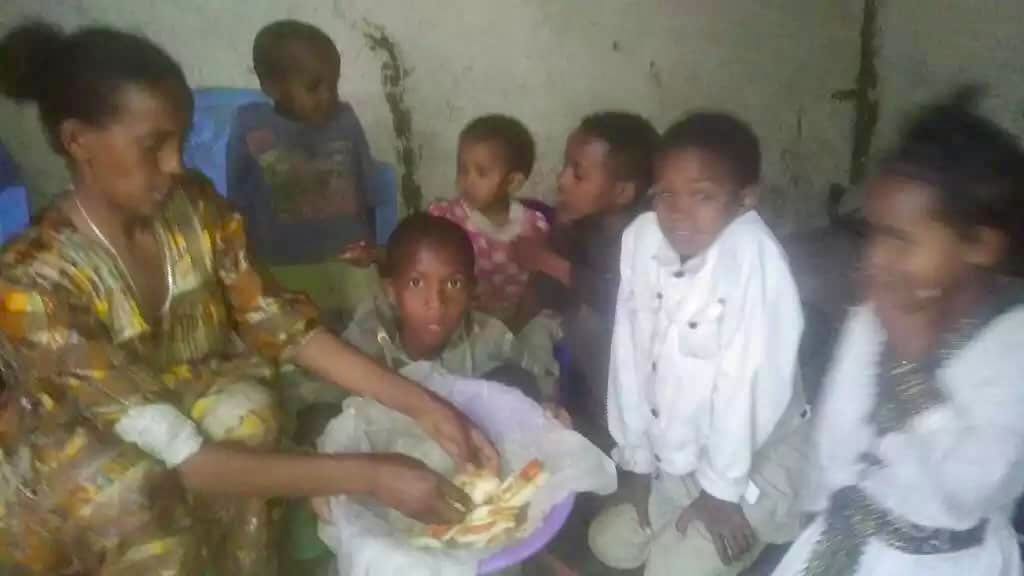 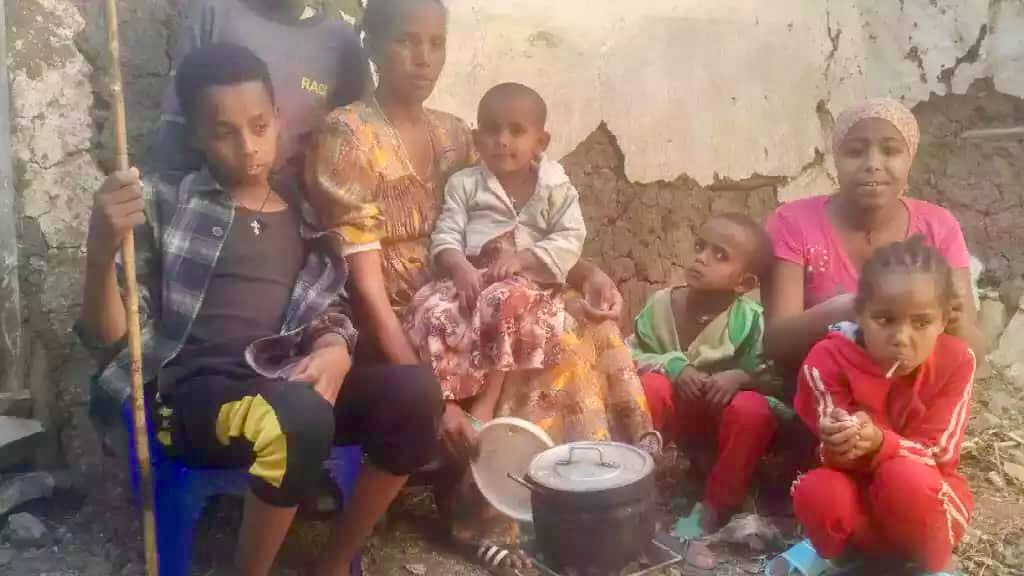 In addition, many pregnant women are malnourished; the increase of children in the street, many of them orphans; the lack of antiretrovirals is causing the virus to regain its strength and tuberculosis is once again affecting many people, many of them with a minimal daily diet in proteins, calories, etc. …. And in the rural areas: the lack of fertilizers and partly the excess of rains has caused that the harvests of many families do not cover the family needs for more than two months. Most of them do not have access to irrigation and the next harvest will be in November of this year.

The worrying thing within the global village is that, what in one part of the village is not enough to feed the cat or the dog, in the other part, fills mothers and fathers with joy thinking that their children, at least for a few days, will be able to eat – this in turn creates a serious problem of gender injustice: a problem, at least in part, created, supported, by members of the same gender as those who suffer from it.

Back to our situation in Tigray; we keep hearing: “tomorrow the banks will open”.  At least we are left with the hope that this “tomorrow” is getting closer.

Today, January 13, “Focus on Africa” has reported that Amhara special troops have begun to leave Tigray – without any comment on the presence of Fano troops, also Amharas. According to the reporter, the Tigrayan government has not communicated this departure. The same reporter announced that there is no news of the presence in Tigray of the independent international commission – for all means.